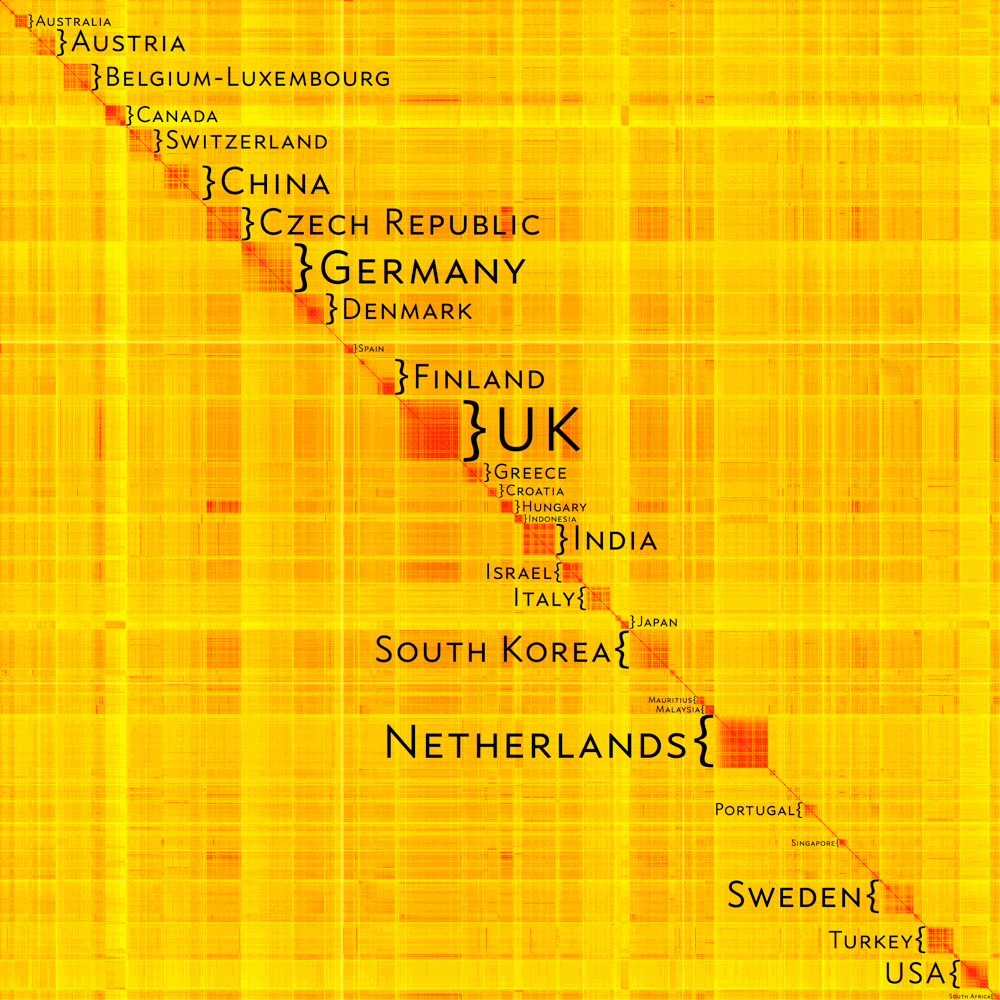 Explore the differences between treaty texts 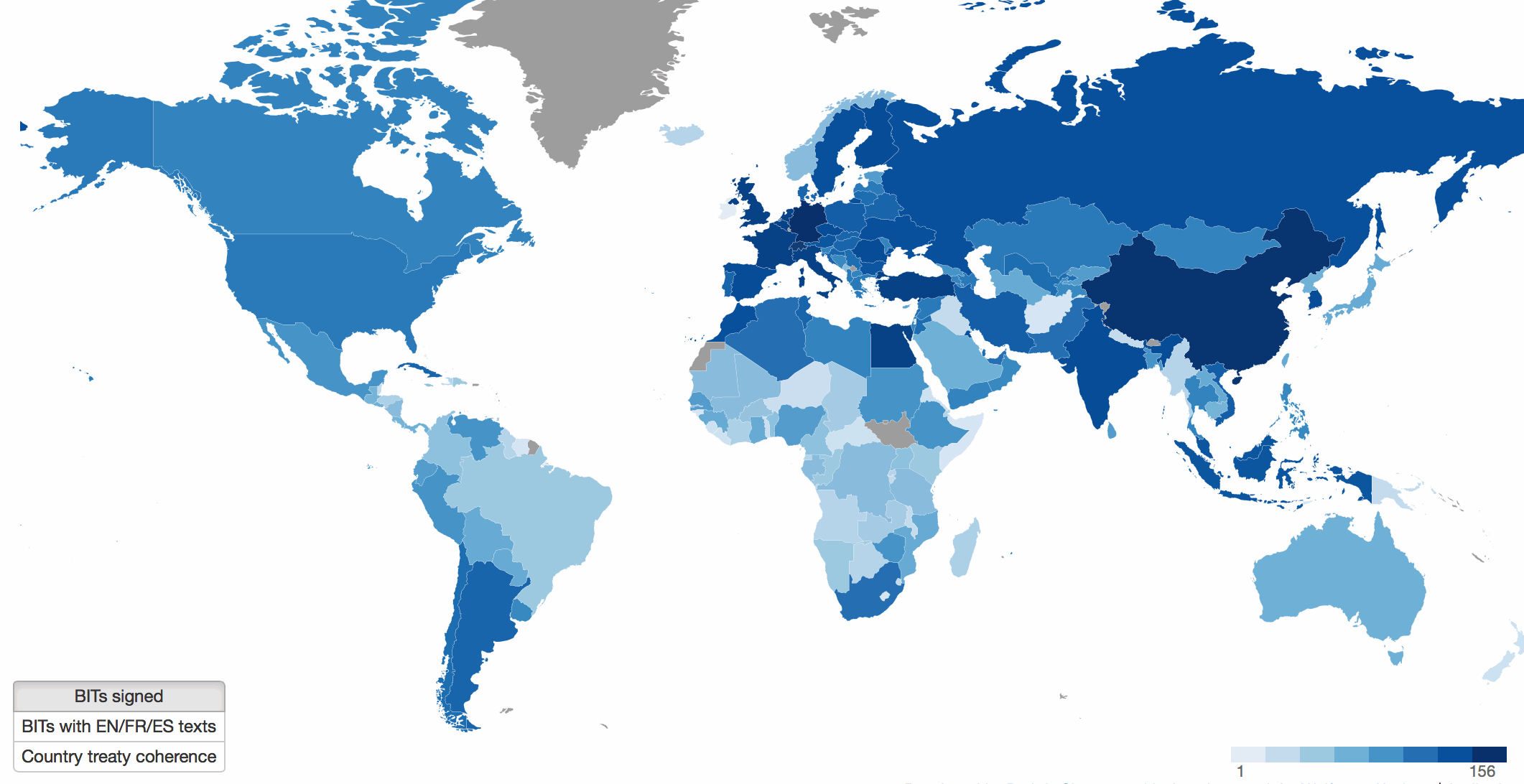 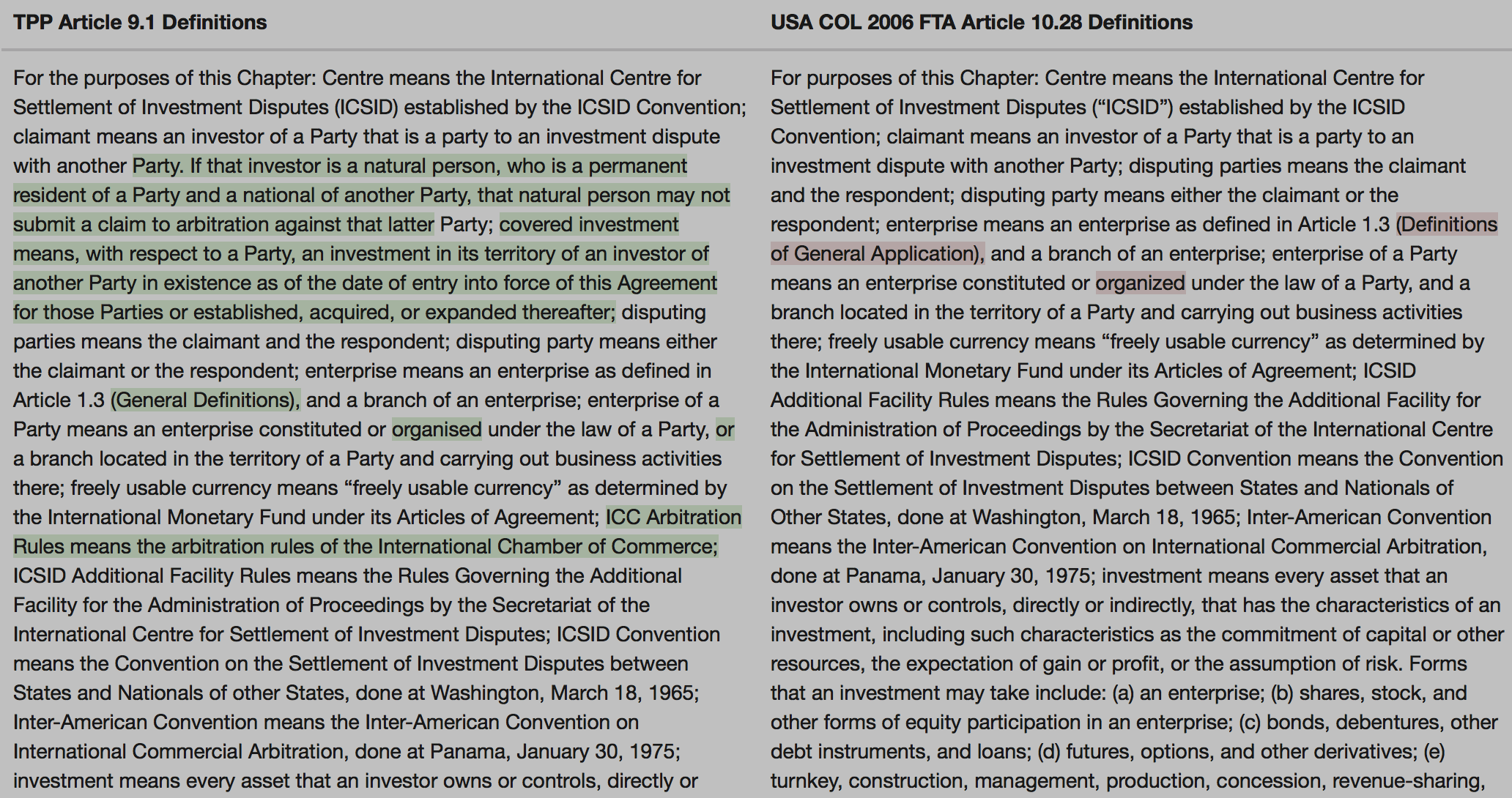 Learn more about the project

Traditional means of content analysis are ill-equipped to deal with the vast universe of international investment agreements (IIAs). In this article, we propose a novel approach to efficiently investigate over 2,100 IIAs and their 24,000 articles in unprecedented detail by treating treaty text as data. [Read more]

The Trans-Pacific Partnership (TPP) has been labeled a ‘new, high-standard trade agreement’. But just how ‘new’ and ‘high’ are the standards it sets? To answer that question we combine traditional legal analysis with computational text comparisons situating the TPP in the universe of international investment agreements (IIAs). [Read more]

Who are the rule-takers and rule-makers in the African BIT universe? Using computational measures of textual similarity this paper provides a nuanced empirical answer to this question. [Read more]

To reduce investment law's complexity, this demo introduces a new interactive web-based tool that relies on state-of-the-art technology to allow users to asses similarities and differences between agreements quickly and intuitively. [Read more]

“With thousands of treaties, many ongoing negotiations and multiple dispute-settlement mechanisms, today’s IIA regime has come close to a point where it is too big and complex to handle for governments and investors alike.”

Using text-as-data analysis, we reduce this complexity and allow policy-makers, arbitrators, and scholars to:

Scholars and arbitrators have recognized that common principles underlie investment treaties. Amongst others, BITs typically provide for:

At the same time, scholars and arbitrators have noted that treaties diverge in their individual wording. The lack of adequate empirical tools, however, has long made it difficult to quantify just how different or how similar these treaties are.

Mapping BITs now remedies this shortcoming allowing users to discover uniformity and diversity among BITs for themselves.

The large heat map compares 1628 English-language BITs concluded between 1959 and 2014. Every treaty occurs once on the horizontal axis and once on the vertical axis. We've developed a continuous metric to gauge similarity between treaties (see Methodology section for the details). This metric ranges from 0 (dark red, full similarity) to 1 (bright yellow, no similarity):

. Each field of the heat map represents two BITs being compared.

Each treaty is compared with itself along the diagonal line. The two sides of the heat map above and below that line are symmetric. Black quadrangles are the borders of individual country treaty networks. Alternatively, they delimit the clusters of similar treaties.

For each bilateral treaty, we identified the wealthier treaty party based on its GDP per capita at the time of signature. Where a treaty involves an OECD member, or, alternatively, a BRIC country, that country is always named first as wealthier party by default.

Therefore, you can sort the treaties on the axes heat map in two ways: by wealthier party or by less wealthy counterpart. Within parties, the treaties are always sorted by date of signature. In addition to that, we've identified clusters of similar treaties. By choosing the third option you sort the treaties by clusters.

We show the world map and color countries depending on their engagement in BIT network. We've obtained the data on the universe of BITs signed from UNCTAD. The more treaties a country signed, the darker is the shade of blue. However, we have English-language treaty texts for 51% of the treaties ever signed. The potential undersampling is displayed with red color palette.

Finally, we rank the countries based on the coherence of their treaty networks. The lower the mean distance between treaties struck by a country, the darker is the shade of green on the map for this country.

Click on a country to view a heat map of its BIT network. Each field of the heat map represents two BITs being compared. You can reorder the heat map to match your research interest:

We also provide links to UNCTAD country profiles to give users background information on countries' economies, international trade and FDI.

Our study reveals the following insights:

This research has benefitted from the funding and support of the following grants and projects:

From text to data

This website breaks new ground by mapping 1628 English language investment treaties – 51% of the BIT universe. For our TPP special we augment the data with Investment Chapter texts from 51 Free Trade Agreement, and 7 Multilateral Investment Treaties.

Second, we manually edit these texts, remove side-letters and schedules of reservations and correct typos, optical character recognition errors, and other mistakes in underlying data sources. We also unify the treaty spelling, converting all British English words to their American English counterparts (e.g. “favour” to “favor”).

Third, we transform text into data by computing treaty differences. Every treaty is dissected into its constituent 5-character substrings (5-grams) preserving word order:

We then compare these treaties by the extent to which they share 5-character substrings. The above two treaties have 21 unique 5-grams, of which 11 feature in both treaties, or 52%. Substracting this figure from 100% yields 48%, a measure of dissimilarity between two treaties. Formally, this is known as the Jaccard distance, which ranges between 0 and 1:

Fifth, we apply Affinity propagation clustering to the dissimilarity matrix in order to uncover structure in the BIT universe. We set the preference q (the a priori suitability of a point to serve as an exemplar) to the lowest quantile of the similarities (minimum similarity). That produces 94 clusters.

Sixth, we come up with a way to interactively display the dissimilarities, on a heat map. It compares BITs based on their similarities (dark red) and differences (bright yellow).

Seventh, for each treaty we locate its 20 closest neighbours in terms of Jaccard distance. We also uncover the cleavages between treaties in a pair by comparing word usage. To this end, we construct a document-term matrix from the treaties (stop words are removed, British spelling differences are mitigated with VarCon). With the aid of the document-term matrix we compute proportions of word use for each word in each treaty. Applying the two-proportion z-test, we find the words that are 10% significantly differently used in the selected treaty pair and display them in an interactive chart.

Eighth, we examine the subsets of treaties by country and compute internal coherence of signed treaties for each country. This enables us to rank countries based on their treaty network coherence. We exclude countries that struck less than 4 treaties from this ranking to ensure that the results are not driven by treaty network size.

Wolfgang is a post-doctoral researcher at the World Trade Institute and at the Graduate Institute of International and Development Studies.

Dmitriy is a Ph.D. candidate at The Graduate Institute of International and Development Studies and a researcher at the Institute for the Rule of Law at the European University at St. Petersburg.

He works at the intersection of Law and Economics, applying economic analysis to various fields of law and seeking to answer legal questions with hard data. Dmitriy is active in sentencing research and economics of crime studies.

Country boundaries are from the U.S. Department of State's Office of the Geographer’s Large Scale International Boundary Lines and World Vector Shorelines Simplified World Polygons data set (as of March, 2013).