While the treaty-based regime for investment dwelled in obscurity for the better part of its first three decades of existence, it has truly become a hot potato over the last decade. While early bilateral investment treaties (BITs) were mainly signed between industrialised states on the one side and developing states on the other, there was a tsunami of BIT signings between all sorts of countries in the 1990s and early 2000s. Then, as treaty signing abated, came the wave of investment treaty arbitration (ITA) claims, some of which were very controversial.

In the wake of this uptick in claims the investment regime has experienced a legitimacy crisis. One of the central questions in the legitimacy debate is: To what extent can states affect the legal content of the treaties they sign? This is a question of power, a question that legal scholars are often hesitant to inquire into. But as awareness around what the political scientist Lauge N. S. Poulsen has called the ‘low-probability, high impact risks’ of BITs has risen (essentially the cost of being hit by an ITA claim), a few empirical studies of who determines the content of BITs have popped up.

Whilst informative descriptive accounts are provided by this blog’s incumbent, most empirical analyses are carried out by political scientists. In one study, Professor Beth Simmons finds that developing countries are more likely to tie their hands under unfavourable BITs than developed countries. In a couple of other studies, Assistant Professors Todd Allee and Clint Peinhardt and PhD Candidate Andrew Lugg find that States’ ability to include strong enforcement provisions in BITs depend on their economic resource base, and that the ability to achieve treaty preferences in general is enhanced by a strong military.

In a recent working paper written together with Øyvind Stiansen, I address two shortcomings of these types of studies. First, most analyses of BIT signing build on a notion of power as force and economic resources. Such hard approaches to state power in international relations were formulated in the context of inter-state conflict and deterrence, but are often uncritically evoked to study cooperative international encounters too. But is power as military force or economic resources actually useful in the context of BIT negotiations? To try and figure that out, we believe the study needs to be adapted to the specific negotiating context.

The context of BIT negotiations is peculiar. The issue-area (investment) is much narrower than that of most other international economic negotiations, and there are only two parties. That makes the preference map more lucid. Moreover, BIT negotiations entail high levels of flexibility and accommodation, where the parties exchange drafts and counter-drafts as well as meeting in personal to sort out particularly difficult provisions. In short, BIT negotiations are close, interpersonal encounters, where two or more negotiators stay in close contact throughout the negotiations.

Based on the assessment of the context, our claim is as follows: While we acknowledge that force-type power may be used to pressure ones adversary into negotiations, and that the size of a country’s home market (potential outward investment) may be leveraged in BIT negotiations – we believe that once negotiations are underway, the nature of negotiations themselves points to the role of negotiating expertise as a source of negotiating power in and of itself.

This focus on expertise is rarely touched upon in the literature, apart from the pioneering work of the abovementioned Poulsen. Based on a series of interviews with developing country BIT negotiators he assesses what led them to bind their hands under treaties that implied such considerable sovereignty losses. One of his key findings is that developing countries lacked the necessary expertise within their bureaucracies to fully understand the potential negative consequences of signing BITs. The types of expertise that may matter in BIT negotiations are many, spanning from expertise in the very process of inter-state negotiation, via expertise in international investment law, to evidence-based expertise on the economic consequences of investment treaties.

The second shortcoming of empirical studies of BIT signing regards how assumptions around countries’ preferences are formulated. Most analyses of BIT signing are modelled within a classic North-South framework, where the world is divided into capital-exporters (developed countries) and capital-importers (developing countries). This baseline notion of asymmetry in BIT negotiations may have been a fair reflection of reality in the early days of BIT signing, when BITs were predominantly signed between countries with very asymmetric levels of development. But today’s map looks fundamentally different. Close to a third of the over 3000 BITs that have been signed are so-called South-South BITs, and multiple treaties have been entered into between emerging economies and developed countries.

The consequence is that the way in which current studies view BIT preferences is a little outdated. In short, whether a country is the most or least developed party to any given negotiation should not be the factor determining their pre-negotiation preference. (The North-South assumption is that all else equal, the developed country prefers high levels of investor protection and the developing country prefers room to regulate.) Our approach is instead to leverage countries’ public bargaining drafts, so-called Model BITs, to measure their preferences. And as Figure 1 depicts, when assessing the textual correlation between all Model BITs in our sample we find that there is considerable variation in countries’ BIT preferences. 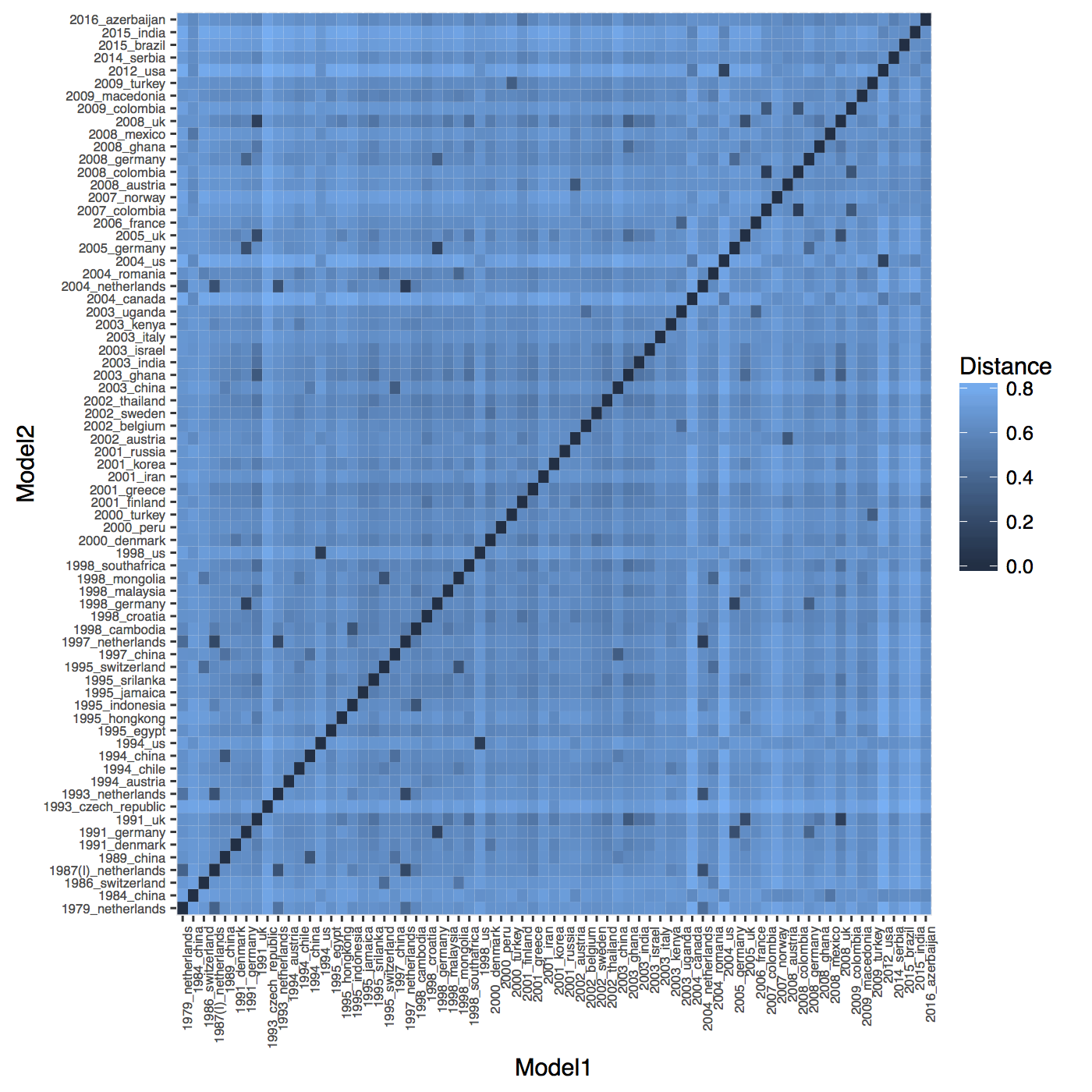 For our empirical analysis we used the same methodology that was used to generate the interactive tool on the Mapping BITs website. We estimate a measure of success based on the Jaccard distance between a large sample of Model BITs and concluded BITs. Figure 2 depicts the mean distance between the Model BITs in our sample, and all BITs that were negotiated based on it. The closer a concluded BIT is to a country’s Model, the better it has performed in the negotiations.

The more successful model treaties belongs to Austria (2002 and 2008), the Netherlands (2004) and the US (2004). Moreover, the relative success of the 1991 British model is particularly interesting given the high number of bits that have been negotiated based on this model (24 in our sample). On the other hand of the spectrum, we find models of countries such as Peru (2000), China (1984), Jamaica (1995) and Mongolia (1998). While these differences in model success are consistent with current narratives focusing on economic resources, it is worth noting the larger variation in the middle of the spectrum and the large standard deviation for some model treaties.

Apart from illustrating the importance of adapting empirical studies of state power to the context in which power is exerted, our findings imply a couple of things. At the general level, we find support for the importance of nurturing impartial, merits-driven bureaucracies to participate in international economic diplomacy on equal terms. More particularly in the context of BITs, our findings suggest that countries should not take easy on future negotiations. A knowledge-based approach to treaty negotiations, anchored to domestic policy-objectives, and held forth in negotiations by capable negotiators with relevant expertise is important to not end up tied down under unfavourable BITs.

And interestingly, in parallel with the fact that researchers struggle to identify a reliable link between BITs and inward investment, there seems to be a movement towards a more knowledge-based approach to BITs. UNCTAD’s Investment Policy Framework for Sustainable Development is a sign of higher-level reorientation in BIT-making. Moreover, many countries have taken direct measures in response to the investment regime’s legitimacy crisis. Australia has expressed a wish to negotiate future BITs without ITA provisions, while Indonesia and India have started a move towards renegotiating BITs in a manner which restricts the access to ITA. The future will show if they back their intentions with the expertise that is needed to carry through.

Textual similarity analysis offers a new way to investigate who wins treaty negotiations. But not every deviation from a prior agreement or a country’s model treaty is a concession.

Can Robots Write Treaties? Yes, They Can!

Recurrent neural networks trained on investment treaty texts can automatically draft new clauses of lawyer-like quality. They will not replace negotiators, but may make their task of composing a compromise text easier.